Rob has been mentoring and couching emerging artists each week over the full year in 2014 at The Station-Murray Bridge. These emerging artists jammed weekly in a creative, industry based environment, with state of the art equipment purchased this year.

He has helped participants to examine the different styles of contemporary music and their relevance, learn structured methods, explore creativity, practice ensemble performance, get the right sound on stage, set up and use the in house P.A., and improve rehearsal techniques. 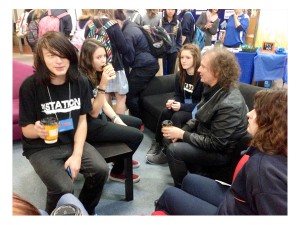 Rob relaxing between sets with team from Cert II in Music

Just last night at The Station, Rob was involved in the first ever session of “Band Connection”, where a group of 12 pre-emerging artists jammed for the first time in a real-time session. One 14 year old guy heard his original song played live for the first time!

An accomplished artist himself, Rob has been kept busy as Musical Director and lead guitarist for – 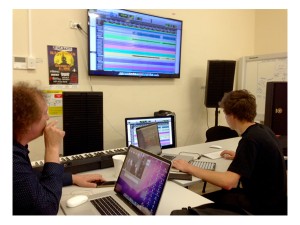 Mixing live recording from the gig at The Station, in their training room

Plus, he has local shows weekly with Supertonic, Hothouse, 2 In The House, and Cold Chisel tribute EAST.

Those emerging artists working with Rob are given an amazing kick-start to their understanding and practice in performance and recording.

We salute you, Rob!